Key rate durations and convexities measure your portfolio’s risk towards changes in specific key interest rates. But when do the individual durations and convexities add up to your overall measures based on parallel shifts? And how well do the delta and gamma vectors represent the nature of the underlying bonds? We have done the math and provide you with some (surprising?) answers and further insight on this topic.

Duration and convexity are classical measures of a bond’s price sensitivity to a parallel shift in interest rates, and as such they are fundamental inputs to the management of risks in your portfolio. However, they do not provide you with information on the risks associated with real-life, non-parallel shifts in the yield curve.

Key rate durations and convexities are one way you can measure expected bond price changes resulting from arbitrary yield curve shifts. In 1992, Thomas Ho1​ introduced key rate durations as the price sensitivity to changes in key rates of specific maturities, obtained by applying a series of triangular shifts to the spot rate at the key maturity points. The triangular shifts are constructed such that they sum to a parallel shift of the yield curve. Figure 1 shows a set of triangular spot rate shifts.

The key rate measures lead to several interesting questions, many of which we are also often asked by our clients, and we will answer two of the most common in this blog:

In order to calculate key rate risk measures, we need to apply discretizations of the duration and convexities as there are generally no closed form solutions.2 Using approximations inevitably introduces a discretization error, which may differ in size and sign depending on the method used. A small error leads to a high precision of the approximation. 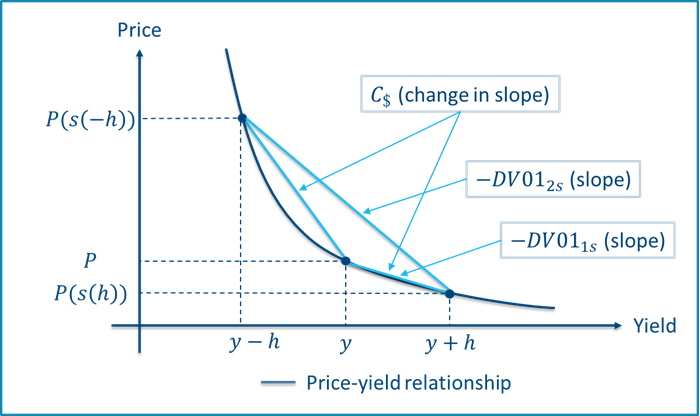 Figure 2 - Discretized dollar duration and convexity based on a positive convex price-yield relationship. Two shifts, \(s(h)\) and \(s(-h)\), are applied to spot rates to obtain the shifted prices.

For those of you who are into formulas, we present those as well. If \(s\) denotes some shift to the yield curve, \(h\) is the shift size, and \(P(s(h))\) is the price of the bond obtained from the shifted yield curve, the one-sided (“1s”) dollar duration measure found using an upward shift is:

Increased precision may be obtained by applying a two-sided shift (“2s”) where the yield curve is shifted both up- and downwards using the same shift:

The dollar convexity measure is always two-sided and defined as:

When the shift \(s\) is parallel, the above formulas give rise to the duration and convexity, whereas the individual key rate durations/convexities are found when \(s\) is a triangular (or similar) shift.

Designing shifts that add up

Key rate measures based on triangular shifts do not always sum to the corresponding parallel measures as shown further below. However, it is possible to define a set of shifts that possesses this quality. We denote these left- and right-adjusted shifts and present them below.

The shifts are designed such that the difference between two consecutive shifts is the corresponding triangular shift. Therefore, each key rate figure is defined using the price difference from the two consecutive shifts surrounding its maturity. Intuitively, the resulting key rate measures add up because the intermediate prices cancel out, leaving only the difference between the start and end prices based on a zero shift and the full parallel shift.

Figure 3 shows an example of left- and right-adjusted shifts used to calculate the 5Y key rate figures. The shifts are named after the key rate maturity at which the shift breaks of from a parallel movement to a linear decline.

For the mathematically minded, we provide the key rate duration formulas using right-adjusted shifts as an example3. To ease notation, let \(P^h_i=P(s^r_i(h))\) where \(s^r_i\) is the i’th right adjusted shift at key rate maturity point \(i\):

for the single-sided case, and for the two-sided case:

where we define \(P(s_{N+1}(h))=P\), as we start out from the right using the unshifted curve. The right-adjusted key rate convexities are defined as:

When do key rate measures add up?

Based on a set of key rates placed in maturities 1Y, 2Y, 5Y, 7Y, 10Y, 20Y and 30Y we compare the dollar duration and convexity to the sum of key rate dollar durations and convexities. The instrument is a Danish 4.5%-2039 non-callable government bond with a bullet profile (DK0009922320), and the results are presented in Table 1.

We have done the math, and we found that the results are completely general for non-callable bonds. The main takeaways are therefore:

It’s all about convexity

We learned from the above example that key rate durations do not add up to the duration when using triangular shifts, even for a bond with no embedded optionality. This is because of the convexity in the price-yield relationship of the bond.

We illustrate this using a single-sided shift and a zero-coupon bond with a maturity  somewhere between 5 and 7 years from today. Figure 4 shows the parallel shift as well as the two relevant key rate shifts surrounding the single bond payment at maturity. 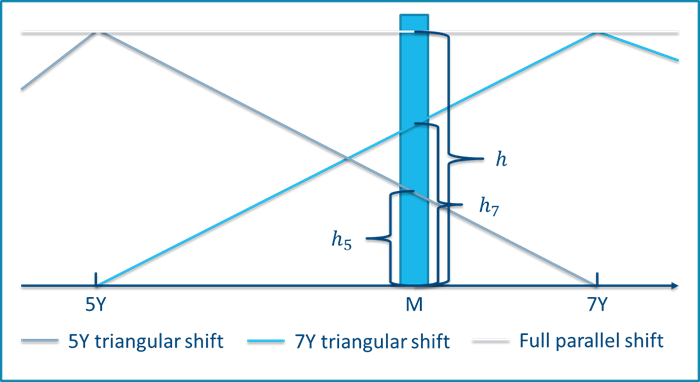 Figure 4 - A parallel shift of size h as well as the 5Y and 7Y triangular shifts relevant for the calculation of (partial) durations for a zero-coupon bond maturing at time M between 5 and 7 years from today.

It is seen that the triangular yield curve shifts add up to the size of the parallel shift at the bond maturity as \(h_5+h_7=h\). However, a similar equality does not hold in prices because of the convexity in the price-yield relationship.

In Figure 5, the zero-coupon bond example is illustrated using price-yield relationships. The price-yield relationship inherits a convex nature from the yield curve’s discount function. We observe that the bond price changes by \(\Delta P_P\) when the yield is increased from \(y^*\) to \(y^*+h\). By the definition above, the parallel dollar duration reflects this price change in a single step represented by the straight, light blue line.

The partial durations split the single yield change into two steps both originating in \(y^*\). The price changes by \(\Delta P_5\) when applying the 5 year triangular shift, and the 7 year triangular shift results in price change of \(\Delta P_7\). It is clear from the graphical illustration that the sum of these two price changes is larger than the price change from the parallel shift \(\Delta P_P\). Mathematically, this is due to the convexity of the price-yield relationship obeying to Jensen’s inequality. As an end result, the key rate dollar durations do not sum to the dollar duration, and we overestimate the actual price change when summing one-sided partial durations under positive convexity. 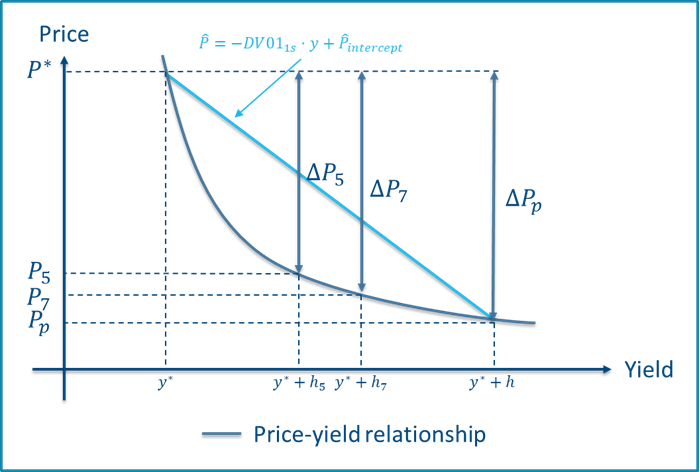 Left or right? Use the average!

Using left- or right-adjusted shifts is the way to go if you want your key rate measures to add to the corresponding parallel measures. However, the choice between the two shift types has a significant impact on how the total risk is distributed on the individual key rates, especially for convexities. To provide a useful solution to this problem, we introduce a simple average method. As indicated by the name, the average method is just the average of the left- and right-adjusted key rate measures:

where superscripts \(a\), \(l\) and \(r\) corresponds to average, left and right, respectively. As both the left- and right-adjusted measures add up to the corresponding parallel measure, this is also trivially the case for the average method.

We set out by illustrating the delta vectors, i.e. key rate dollar durations. We consider the one-sided case for the Danish 4.5%-2039 non-callable government bullet bond (DK0009922320). We use a rather large shift size of 100 bps to emphasize our conclusions. The delta vectors based on all four methods are shown in Figure 6. 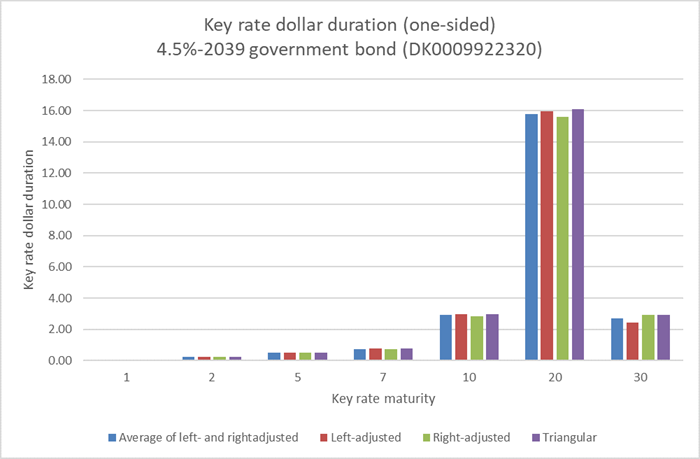 The bullet bond pays a fixed coupon of 4.5% per year and is non-callable with 21 years to maturity, and we therefore expect the durations to be centered around the 20 year key rate which is also the case. Furthermore, we observe that the triangular shifts give rise to the largest key rate durations for all maturities. This is in line with our previous finding that one-sided triangular spot rate shifts result in too much duration.

Again, we have done the math and present you with the general results to remember:

Gamma vectors and the convexity push

We continue our illustrations using gamma vectors, i.e. key rate dollar convexities. These are shown in Figure 7 for the 4.5%-2039 government bond using a shift size of 10 bps. 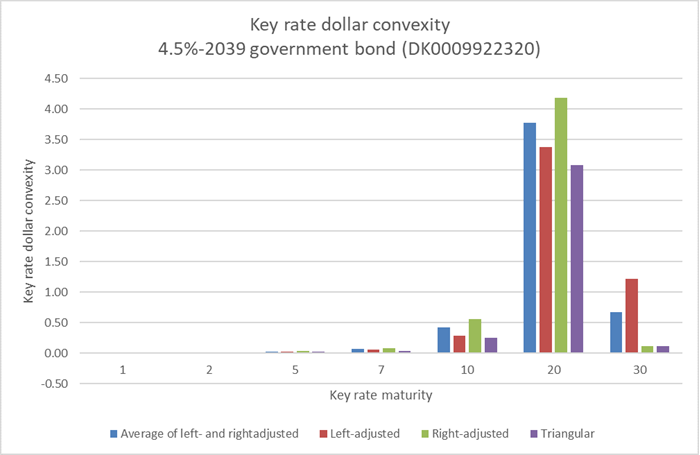 In this blog, we describe the classical risk measures of duration and convexity and how they relate to their key rate counterparts. Our main findings are:

2 For bonds with no embedded optionality, these are just numerical approximations of the classical dollar durations and convexities when a parallel shift is applied. If the bond has embedded optionality, e.g. if it is a Danish callable mortgage backed bond with a prepayment option, our measures are the option adjusted versions.

Troels is partner in Scanrate and Head of Fixed Income Analysis. Troels has worked with both corporate and mortgage backed bonds for more than ten years.