During the summer of 2018, the Danish government has refinanced approximately DKK 8bn of callable loans by taking new loans funded in bonds from the recently established government guaranteed capital centers according to the Danish Transport, Construction and Housing Authorithy. How will these new bonds affect the Danish bond market, and how should they be priced compared to regular adjustable-rate mortgage bonds (RTL)?

Overview of the newly issued bonds

The table below provides an overview of the newly issued mortgage bonds with a government guarantee.

Table 1: Selected data of the new government guaranteed mortgage bonds. (*): Outstanding amount as of august the 10th 2018 in DKK millions.

The four issuers have opened series with a maturity from 1 to 10 years. The bonds are non-callable. There has not been issued loans in LR’s series, which are ROs meaning the institute is not obliged to supply additional capital in case LTV1 should exceed the statutory threshold. All of the series are still relatively small, but the outstanding amount will increase considerably after October the 1st 2018 when the first refinancing of the social housing loans will take place.

Where is the prepayment happening?

The Danish Transport, Construction and Housing Authority announced in November 20172,  that loans with a combined outstanding amount of DKK 37bn would be redeemed when the new rules come to effect. But at the end of third quarter 2018 only DKK 8bn have been redeemed. The agency has primarily chosen to redeem mortgages with a market price above DKK 100, as a buyback strategy is yet to be formulated. Buyback of the bonds carries the risk of paying too high a price in the market. The social housing sector continues to hold callable loans with total nominal of approximately DKK 29bn.

According to an announcement from the agency3, refinancing in the 3 percent coupon rate segment will reach DKK 7bn. The total prepaid amount for bonds with 3 percent coupon rate is around DKK 15bn meaning that the new government guaranteed mortgage bonds plays a significant role in the prepayments of October 2018. The large redemption amount will affect the HQLA4-classification for several bonds. They will drop from level 1B to level 2A which will make them less attractive as collateral. Table 2 shows the bonds which will drop to level 2A, and those at risk for doing so in the near future.

The rest of the refinanced loans have coupon rates between 1.5 and 2.5 percent. The social housing sector generally demands the lowest possible coupon rate, so we assume that the remaining callable loans will also be in that coupon range.

How does the government guarantee affect the price? 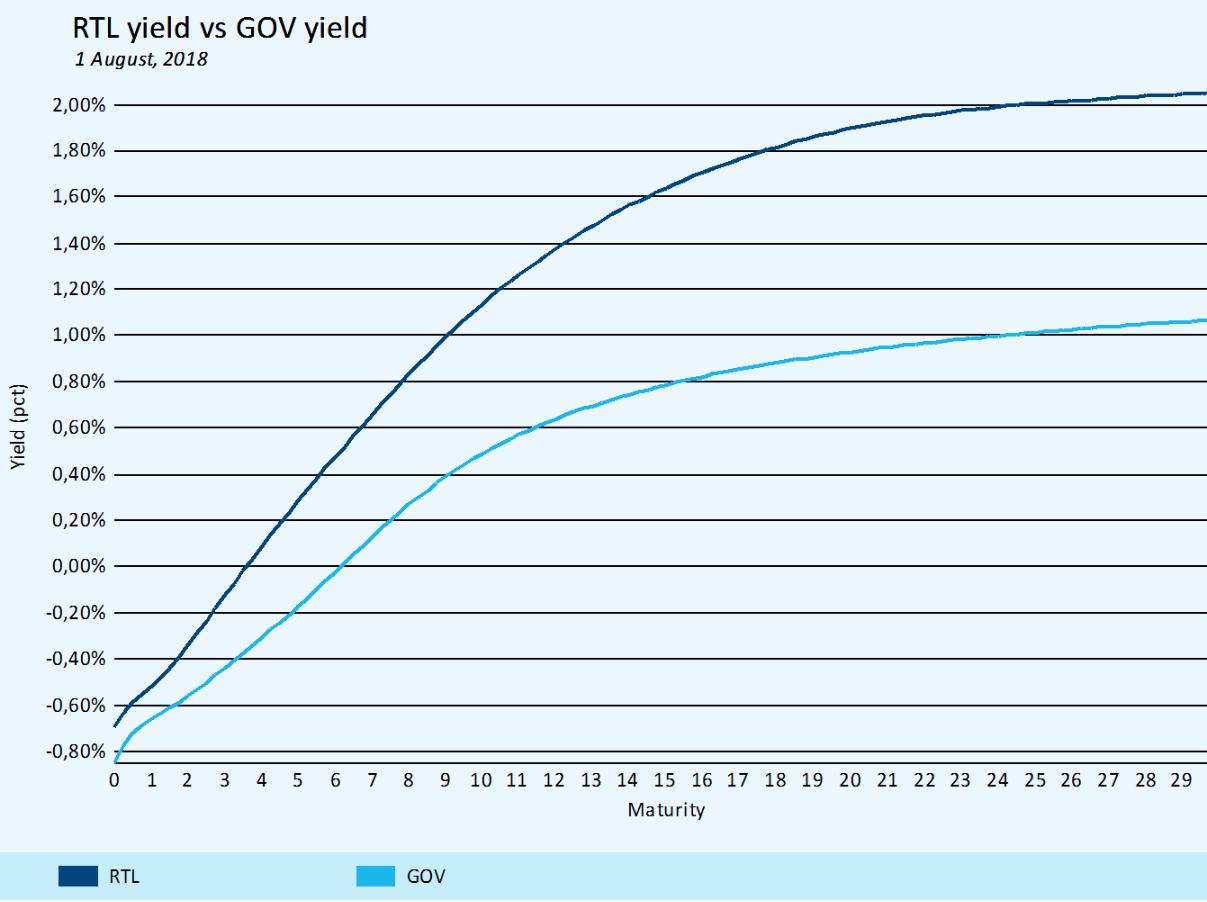 The trading activity remains low in the series and we have so far only observed primary transactions meaning that the issuer sells the bond directly to the investor. Scanrate Pricing Service prices the bond using the Danish government curve with a zero spread. Figure 2 shows the results of the 10-year bond from Nykredit (DK0009518466). The bond is traded twice during the period from July 7th 2018 to august 7th 2018. Both quotes have a total volume of more than DKK 5m. There is still not enough data to determine whether there exists a spread between a regular government bond and a mortgage bond with government guarantee.

To conclude, we compare the calculated prices for three bonds with the same characteristics but different levels of credit risk. The bonds considered are the traditional 10-year RTL-bond issued in Nykredits capital center H, the 10-year government guaranteed mortgage bond from the previous example and a Kommunekredit-bond. The KommuneKredit-bond carries a municipal guarantee for the entire nominal placing it between the other two with respect to credit risk. Scanrate Pricing Service deduces the spread between a traditional RTL-bond and the fixed rate, non-callable bonds issued by KommuneKredit based on observed trades in the market. The comparison of the evaluated prices is shown in Figure 3.

Previously this was not possible as the social housing loans were mixed with other loans in the bond series.

Figure 3: Evaluated prices for non-callable mortgage bonds with a 10-year maturity. They are priced at three different levels due to the credit risk.

Contact Scanrate, for more information about government guaranteed mortgage bonds or if you want to learn more about Scanrate Pricing Service.

1​ Loan-to-value: Market value of the loans divided by the total estimated estate value